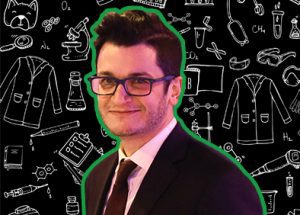 Anthony Bellotti is the Founder and President of the White Coat Waste Project (WCW). Bellotti was inspired to end animal testing following a high school internship in a taxpayer-funded laboratory.

Under Bellotti’s leadership, WCW was honored as “Public Affairs Campaign of the Year” and honored with the prestigious LUSH Prize for the world’s top public awareness campaign. WCW shocked the world by first exposing U.S. funding for animal experiments at the Wuhan lab and Dr. Anthony Fauci’s experiments on beagles, monkeys, and other animals. WCW’s campaigns have cut government experimentation on dogs and cats to its lowest-ever level and achieved the first federal policies to retire and release survivors. Over the last half-decade, WCW has been the only group to shut down primate labs in the United States.

An amateur musician, Bellotti practices jazz and rock drumming in his spare time. He and his significant other live with Petite and Delilah — two lab survivors adopted after WCW closed the USDA’s “Kitten Slaughterhouse,” the largest cat lab in the entire federal government.