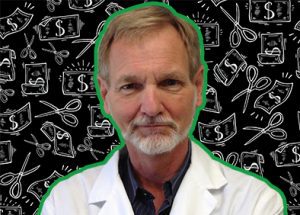 Dr. Hansen received his Bachelor of Arts degree in English Literature in 1974 from North Central College in Naperville, IL. He was granted a Medical Degree in 1977 from Loyola University Stritch School of Medicine in Maywood, IL. Following an internship in Psychiatry at Loyola in Maywood, Dr. Hansen spent four years in combined Anatomic and Clinical pathology training, also at Loyola. He followed this with three years of Neuropathology residency at Emory University in Atlanta, GA, and then went to UCSD for a two-year fellowship in Geriatric Neuropathology and Dementia. After an additional year of surgical pathology fellowship at William Beaumont Hospital in Royal Oak, Michigan, Dr. Hansen joined the faculty at UCSD School of Medicine in the Departments of Neurosciences and Pathology in 1988.

Dr. Hansen teaches first- and second-year students in major core courses in basic neurology, histology, and human disease and is deeply involved in the education of residents in pathology, neurology, and neurosurgery. He teaches all aspects of neuromuscular pathology and is equally involved in teaching general and systemic pathology in core courses in the schools of Medicine and Pharmacy and Pharmaceutical Sciences. He has enjoyed particular recognition through the many teaching awards he has received, most notably the Kaiser Permanente Teaching Award from second-year medical students, which he has received ten times.

In addition, his teaching has been recognized by other groups including the residents in Neurology, Neurosurgery and Pathology, all of whom value his teaching for its succinctness and clarity. Dr. Hansen truly enjoys teaching and excels at teaching in many areas of anatomic pathology as well as the nervous system.

Dr. Hansen’s research remains focused on the pathology and pathogenesis of dementing illnesses, in particular the Lewy variant of Alzheimer disease in which his work is very well known. For 20 years he led the neuropathology core of the Alzheimer Disease Research Center (ADRC) based in the UCSD Department of Neurosciences. Dr. Hansen is also an attending on the clinical neuropathology service at UCSD working with neurosurgeons and neuro-oncologists on brain tumor diagnosis and treatment.