Since 2015, no animal rights organization has actually shut down a primate lab in the USA.

So, if you gave money to another group over the last half decade — and if your goal was to actually close monkey labs — then your support was wasted.

But anytime you’re facing a poor return on investment, whether it’s a loser pick in the stock market or a bad bet on a rental property, the first step is to admit there’s a problem.

Step 2: when you’re in a hole, stop digging. Don’t keep writing checks if these groups can’t shut down labs.

Instead, ask them specifically: did you close any monkey labs? Last year? The year before? When was the last time? What have you done for me lately?

Then cut your losers off; good intentions aren’t enough — even when it’s your favorite charity. (Besides, most big groups took PPP bailouts. They’ll be just fine. The monkeys won’t.)

Step 3: reallocate your investment. But to where? Are there any bright spots for primates?

Turns out, the answer is yes.  Here’s some good news…

Since 2016 (our first full-time, full year), the White Coat Waste Project (WCW) has closed THREE primate labs — in fact, the ONLY three:

WCW’s success isn’t merely due to our political access. Our wins — and specifically, these lab closures — happened under both Presidents Trump and Biden.

The score is now 3-0. And it’s so because we run better campaigns.​ 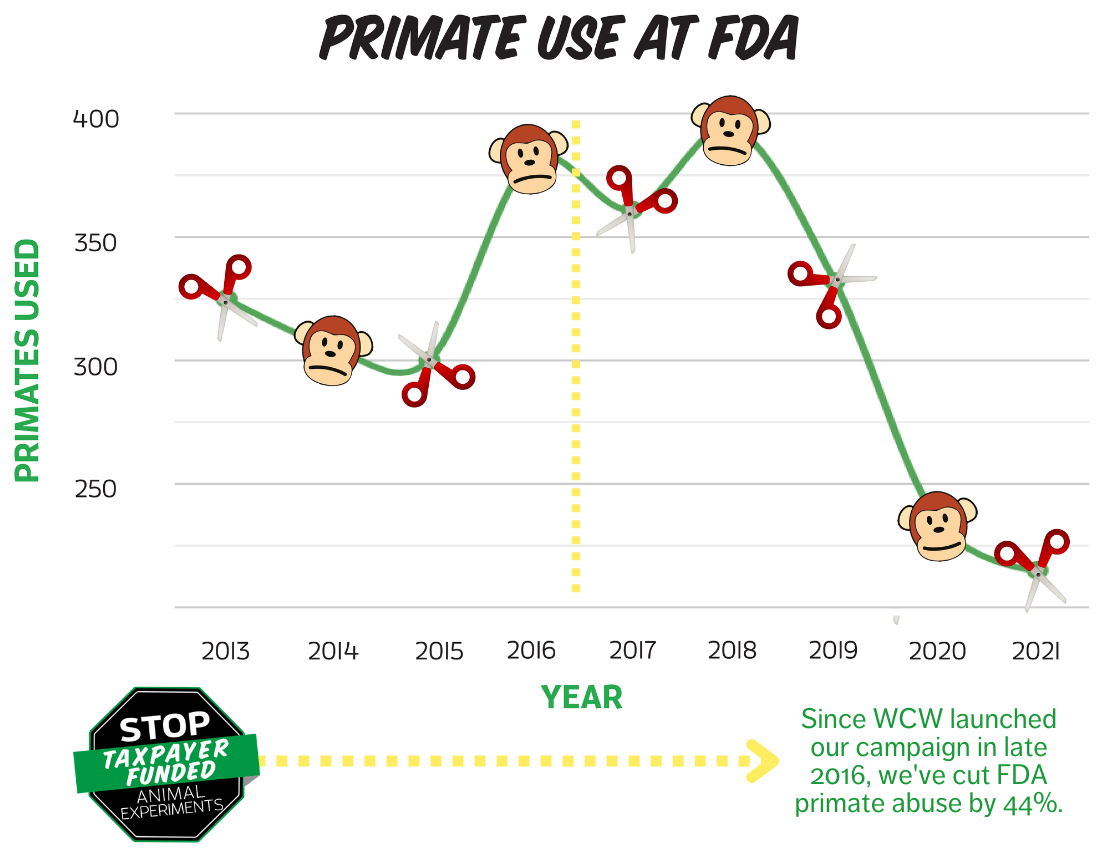 Case in point: our campaign to expose and end FDA’s monkey business has slashed its primate abuse by 44%!

Check out this new article here to see how you made it happen.

“The Committee continues to encourage the FDA to reduce primate testing, prioritize alternative research methods, and seek opportunities to relocate primates to sanctuaries.”

That’s the FDA-Ag Appropriations committee language we secured this year and every year since 2019. Thanks to you, WCW has made cutting wasteful spending an FDA priority.

But I think we can do even better than 44%. So WCW just filed this new lawsuit to rattle the FDA cages — and help empty them by 100%.

And don’t forget about the VA! You helped us enact a phaseout of VA primate labs by 2025 — the first time in American history that Congress has given a federal agency a hard deadline to cut its monkey business.

What about day 2? Where do the survivors go after we close their labs?

You already know that NIH chimpanzee retirement wasn’t exactly smooth sailing. This campaign predated WCW by a decade — but we studied it.

And we learned from it.

Back in 2018, we realized no government agencies had formal policies to retire and release lab survivors. Taxpayers “bought” them, so WCW launched the first federal campaigns to make Uncle Sam’s white coats #GiveThemBack!

Here’s the very best overview of our #GiveThemBack progress. Here’s another good one from former Congressman Mike Bishop, a WCW Advisory Board Member.

To be fair, there are plenty of things we aren’t good at. For example:

Don’t look to WCW for leadership here; you won’t find it.

However, you definitely won’t find effective primate lab campaigns anywhere else — and you really shouldn’t keep funding any other groups if they keep failing at it.

Bottom line: if you can’t shut a monkey lab down, then you shouldn’t be in this monkey business.

Stop the Money. Stop the Madness!

P.S. You wouldn’t keep investing in Apple stock if Tim Cook failed to deliver ROI on the new iPhone 14. Don’t your charitable investments for primates deserve the same consideration? Our new FDA lawsuit is a step in the right direction. Thank you for making it possible! — AB